For lawyers and law firms that advertise online - YOU'RE DOING IT WRONG.

Imagine going to the gym and you find that 90% of the people are doing it WRONG.  That's basically the state of ONLINE LAW FIRM MARKETING.

I'd like to take a moment and call attention to VERY COMMON law firm marketing blunders that are NEVER difficult to find. 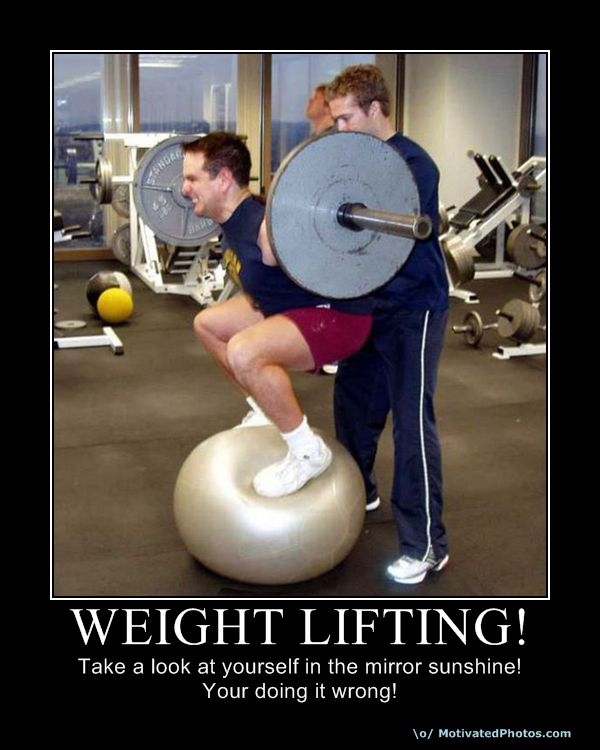 This guy is NOT interested in learning or getting competent at a normal back squat with his feet on the ground.

Disregard the basics entirely, throw the normal back squat out the window, don't even become "intermediate" instead pay good money to a "trainer" who's happy to take your money and teach you "gimmicky" exercises that are pointless and TOTALLY NOT SAFE.

What most people in the gym don't realize is that the basic behind the neck barbell squat with one's feet planted ON THE GROUND is one of the most beneficial exercises EVER is it works the TOTAL body.  The NORMAL squat on it's own requires core strength to stabilize the weight, will  build muscle, incorporates stabilizing muscles and ligaments and by strengthening those things you can prevent injury.  In addition to the legs you'll tone and sculpt your abs and backside.

BUT YOU HAVE TO USE PROPER FORM AND REAL WEIGHT.

This guy PROBABLY CANNOT squat his body weight for 5 reps and is doing silliness with 135 pounds on the barbell.  HE WOULD BE MUCH BETTER OFF doing a normal squat...BUT he insists on doing it his way 😉

Sadly, un-informed onlookers must think "Wow looks neat, maybe I should pay a trainer so I can too can do these complicated exercises I couldn't do on my own."

In 2012 Mr. Kassuri gave me permission to look at his Adwords, and make recommendations.  He told me he spends $4,000 per month and when I looked at his account I was shocked.

We never met because he got to busy and in 2013 he circled back with me looking for improvements to quality score and to set up re-marekting.

He was still using the website above, and there were times he spent closer to $8,000 per month instead of his budgeted $4k.

Like the guy "doing it wrong"  in the gym, Mr. Kassuri was concerned with quality score and remarketing, these are things to improve upon once you've mastered the basics.  How bout a website with less Starwars...what does your ad copy say, are you bidding on the right keywords, let's track what keywords result in not just clicks, but calls and consultation requests.

Basics being you're tracking conversions, have curiosity generating ad copy, not sending traffic to your home page, and offering potential clients more ways to contact your firm than just the branded vanity or 800 number.

This is just a quick page I put together for LOLs to highlight how backwards online law firm marketing is.

Best practices are good because they give you a good baseline or foundation to use as a starting point.  Adhere to certain well established do's and don'ts and you'll be on your way to getting "good" end results.

Case in point when the studio engineer mixes the music with the intention of releasing the song commercially.  Here's what happens...

A recording engineer records the music...singer, drums, guitar, bass pianos/keys and so forth.  During recording you want the best sounding take, but these recordings while they probably sound great on their own need to be blended together so that they sound cohesive and elements are not fighting each other.

Listen to the 1st audio example on this page.

It's extremely well mixed...I mean the guy is a pro who's worked with a number of well known artists.

Anyhow when mixing music there are certain very well established do's and don'ts.  To get a good mix the engineer considers...the overall volume levels of each individual sound, their placement in the stereo field (left, right or center) and their how each part is EQ'd and what effects are used on each of them.

Being that I've released my own music you can find on iTunes...here are things you do and don't do.

You generally DON'T pan the low end such as the bass guitar or kick drum left or right, the low end is always dead center as is the snare drum.

When you EQ you generally want to remove certain frequencies not add to them. For instance both the kick drum and the bass could share some of the same low frequencies and you don't want them fighting or canceling each other out.

If you have a very low boomy kick drum don't record bass using the lower octaves or frets, these 2 things will compete.  Or you have to remove bass from one of them either the kick or bass.

The lead vocals are always panned center as well.  Backing vocals and guitars can be panned left or right. Just getting these few things right makes a world of difference.  Start with a quality recording or the right samples rather than trying to make it sound good by over doing it with EQ and Effects, mix the music properly using good tools and the outline below.  Today making music is more affordable then ever but not everyone has music that sounds good.

It's not about fancy microphones, expensive studios and gear...record good music and have it mixed by a competent professional who has mastered the basics...

What does this mean for lawyers?

Many lawyers advertising online are not even getting the basics right.  Getting them done right will put your firm heads and shoulders above the competition...then it might be appropriate to look at little improvements that can get you the extra edge, such as remarketing.  Many lawyers can make great improvements to their online marketing by understanding the basic principles and getting the basics right.  Not being led astray by the cool new marketing medium, smooth talking sales people, or following the latest on business blogs or attorney marketing blogs.

Back to fitness...the general public has been led astray by so called fitness experts and businesses who are truly in it to make money but disguise it as "helping people."

"...But the business model is akin to babysitting: There’s no percentage in teaching clients independence by showing them basic barbell lifts and telling them to add weight each time. Better to invent super-fun, high-intensity routines that entertain and bewilder clients, so they’ll never leave you."

This is a good read as there are many similarities between how big fitness businesses and big online marketing companies operate.  All the better if you enjoy fitness and are tired of constantly trying to "get in shape."

The author discusses how he got stronger and more fit using boring un-sexy barbell exercises.  Consistent barbell exercises using good form will get you fit, BUT a good amount of learning and or coaching is involved.  Doing the same routine over and over while adding a little weight each time....is pretty mundane..this is not the kind of thing that will sell millions of Fitness DVD's.

Branding...logos...social media..."overall web strategy" this kind of stuff will generate lots of fees for agencies, sounds great to talk about and discuss in meetings, but really doesn't do much in terms of opening new cases and impacting the bottom line.

A well tuned Adwords Account, and proper website for driving traffic gets results for injury lawyers hands down.

Television works but cost is a barrier.

You can network - for example I met a guy in the local BNI chapter who grosses close to $100k a year in fees from referrals passed to him...but networking takes time..he's been doing it for 10+ years now...and he has to be at a breakfast meeting every week at 7am.